What is art if it’s not to relay a message! I galloped across Dublin today to the Hugh Lane Gallery to see the exhibition Our Plundered Planet by Mark Dion.’”Our Plundered Planet” the title itself suggests a strong message STOP MESSING WITH OUR PLANET. ‘Plundered’ being a tough, almost violent , word I expected an exhibition that packed some punch. I dragged my 21 year old daughter with me and she had no expectations, she was along for the free shopping on the way there or back. As we were trundling along from The National Gallery , as that was where we parked, I told her the title of the exhibition and her ears pricked up– she loves a good delve into social injustice or anything vaguely related to this. But sadly even she was disappointed. The exhibition was, although pretty, very bland. I wonder has Mr Dion ever seen the left behind carcass of a rhino whose horn has been hacked off by poachers in the wild, poachers who are supplying a greedy market of users who care not a jot of the giant beautiful beast their minuscule mound of powder came from. The horn of the rhino looked perfectly moulded and made, the black of it uniform and shiny, no sign of it being axed from the top of a living beasts nose. It was neatly sitting in a layer of black like substance which looked like bitumen. This being the only thing I thought was offering some visual description of the damage we as humans are inflicting on our earth. The reference to tar conjured up images of the way we as humans use these substances to ram road over nature. There was little or no visual clue or reference to the damage we inflict on animals for our own ends or material gains .

Although some of the drawings were intricate and detailed and pleasing to the eye, the message just was not there . At no time did I feel, looking at any of the pieces in exhibit, a strum of anger in the pit of my stomach, at no time was I moved to pure outrage at what we were doing to our planet. The exhibition was more like a child’s render of what they see and experience in a visit to a Natural History museum. Mark Dion made a reference in his video explanation of his art in where he said he was trying to bring the exhibits of just such a place to an art gallery and in my opinion that’s all he achieved. Although the exhibit was pleasing to look at, overall I was extremely disappointed that the message of us plundering our earth was nowhere to be seen, just a pretty layout of what a botanist or biologist might collect , it was more like a movie set for All Creatures Great and Small! 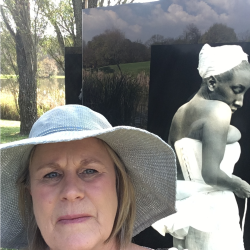